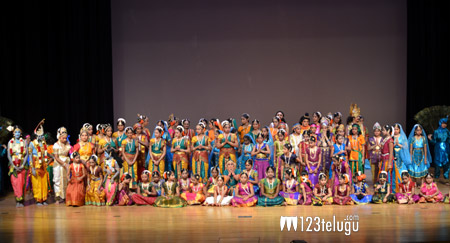 It was a celebration of the fifth anniversary of Echoes of India,www.echoesofindia.net , a non-profit organization dedicated to the service of rural India in collaboration with the Natynajali School of Dance in Dallas, www.natyanjalius.commetroplex, at Granville Arts Center, Garland, Texas on the November 15, 2014. The celebration was memorable, enchanting, and mesmerizing and consisted of a Kuchipudi dance ballet, Sri Krishna Saranam Mama, a story of Lord Krishna, and performed by well over ninety student artists of Natyanjali School of Dance trained under the admirable tutelage of Srilatha Suri, the Artistic Director of the school. The participants ranged from a very tender age of 4 or 5 to almost adult age to fit the various roles of the play, from baby boy Krishna to Vasudeva, Gipkas, and Kamsa etc Parts of the dance drama were adopted from guru Padmasrisobhanaiduoriginal choreography Srikrishnasharanammama.
The event was started with a traditional Kuchipudi prayer, followed by Shuklambaradaramvishnum andjathis by the junior most students of Natyanjali.

As the event is the celebration of the fifth anniversary of the Echoes of India a short presentation about the services by Echoes of India followed before the main dance. It was a short movie depicting a) successful installation of 11reverse osmosis (RO)water plants benefitting almost 60, 000 villagers in Nalgonda district, b) establishment of Kuchipudi rural clinic serving daily 20-30 villagers.
Three medical camps treating 110 diabetic patients and conducting health checks. The presentation also included a list of donors and sponsors who have helped thus far.

The dance drama took the audience from garland Texas to gokulam and brindavan from birth to the romantic and playful acts of Krishna with Gopikas and Gopabalasand the rasa kreedas with his wives, with Sreeragini as Narada playing the impressive kalahapriyarole.Pallavi shah and Dr Rajesh Adusimili played the roles of devaki and vasudeva very well.
Gopikasand GopaBalas and did their excellent reverberating performance with their childhood plays with young naughty Krishna played by Manasvik and Amiya c.
Srilatha Suri as yashoda won the hearts of many with her ease in abhinaya. kaliya by Priyankamesmerized the audience while Vatsalya as tandavakrishna danced with grace Spruha and Samhita as krishnas in rasakreeda played krishna role with dignity and Pranhuti Suri as RadhaSatyabhama stole the playing two different roles but fitting the character perfectly showcasing her experience and talent . The special effects of moon light jiff, waterfalls jiff made it very natural and realistic.
And indeed the unique feature of the play is the display of all the five stages of Lord Krishna each Krishna along with each of his wives.SumanVadlamani,Sobitha,Trilokta,ApporvaAnnanyaPallvi made the rasakreeda colorful and energetic
Special mention has to be made to the portryal of kamsa by SilpthaPochiraju.
The ballet was concluded with a traditional mangalam. This was specially choreographed and directed by SmtSrilatha Suri for this occasion.
The assiduous and extreme care exercised by Smt. SrilathaSuri in meticulously designing each scene, andpaying attention to the minutest details added much tothe glory of the presentation and is highly commendable. The thematic special effects designed by her, the backdrops befitting the theme of each scene to represent reality are especially noteworthy. It was a task of immense proportions, effort, and patience to train almost 90 disciples to perfection, and speaks eloquently of her dedication to the Kuchipudi dance form. Their performance with very lively and pleasant facial expressions and fine footwork and coordination endeared them to the audience.

Echoes of India thanks all donors and media sponsors 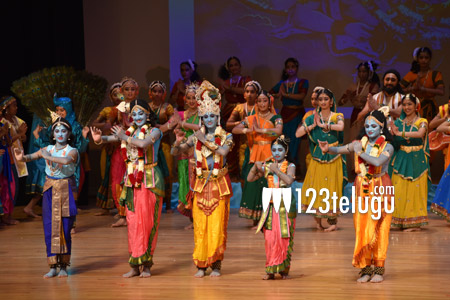 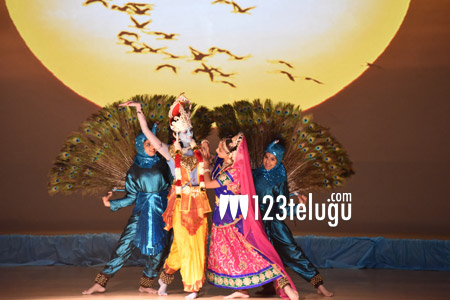 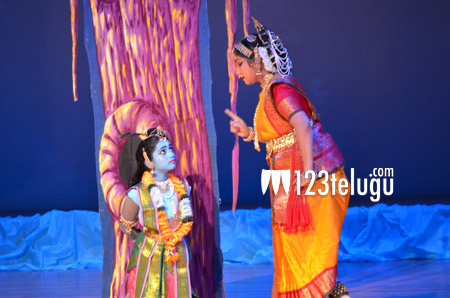