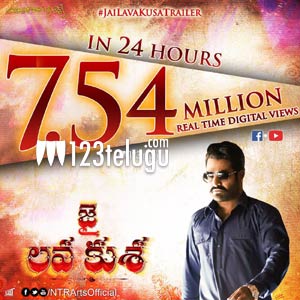 The theatrical trailer of NTR’s soon to be released action entertainer, Jai Lava Kusa, was released in a grand event a couple of nights ago. Within 24 hours, the trailer has amassed more than 7.54 million digital views and stood next only to Baahubali 2’s trailer.

Thanking his fans for their support, Tarak took to Twitter and said that he is overwhelmed with the response to the trailer and vowed to always strive to satisfy his fans with his work.

Overwhelmed with the response to #JaiLavaKusaTrailer . Thanks everyone. As said before, will always strive to satisfy you all with my work