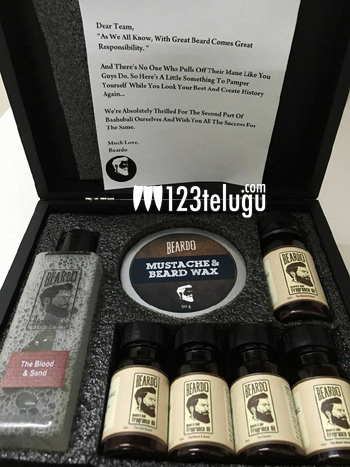 When you think about ‘Baahubali’, many things come to mind. One of the things you associate with the team is a long beard. Almost everyone from Prabhas to Rana to Rajamouli and producer Shobu could be seen sporting long beards during the shooting of the first part.

Now that the second part’s shoot has commenced, the team has started sporting beards again. A national brand that caters to men’s grooming products decided to make the most of this and some hampers were sent to Baahubali team members. This hamper contained beard oil, beard wax and other grooming products.

The team members were thrilled to receive this wacky gift and they posted the image of the hamper online.