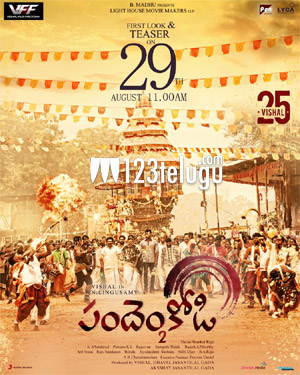 Pandem Kodi 2, the sequel to Tamil hero Vishal’s 2005 blockbuster, Sandakozhi (Pandem Kodi in Telugu), marks the actor’s silver jubilee film. The film has wrapped up its shooting formalities and is gearing up for release on October 18, as a Dasara festive treat.

And the latest update is that Pandem Kodi 2’s first look and teaser will be unveiled on August 29 at 11:00 am. Keerthy Suresh is playing the female lead in this highly-anticipated sequel. Noted Tamil director Lingusamy is directing Pandem Kodi 2 and Vishal himself is bankrolling it. Tollywood producer Tagore Madhu is releasing the Telugu version.