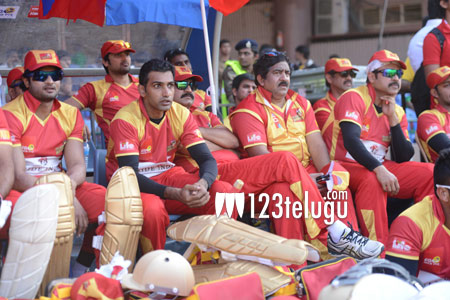 Telugu Warriors team, headed by Venkatesh, is all set to take on Mumbai Heroes team later today in Dubai. This is the second match which the Telugu Warriors team is going to play in the fourth edition of Celebrity Cricket League (CCL). Akhil Akkineni is the vice-captain of the team which also consists of actors like Sudheer Babu, Srikanth, Nikhil, Tarun and Adarsh Balakrishna.

Last month, Telugu Warriors team had lost their first match against Kerala Strikers match which was held in Bangalore. The team had been practising for their latest match for the past couple of days and they are confident that they’ll pull off a much needed win in today’s game. Sachin Joshi is the owner of the team and Sunny Leone, Archana Vijaya, Charmi are cheering for the team.

On the other hand, several other celebrities from Bollywood and Tollywood are expected to grace the event including Shruti Haasan, Huma Qureshi and others.