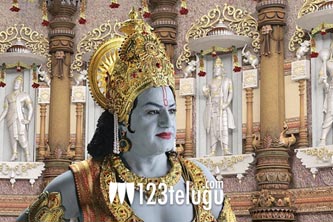 The first look of Natasimham Nandamuri Balakrishna as Lord Sri Rama was revealed yesterday along with a couple of other photos from the movie ‘Sri Rama Rajyam’. The photos have evoked a superb reaction from the general public. People have been saying that Balayya’s look is reminding everyone of Telugu Cinema Legend Shri N.T.Rama Rao.

Nayanatara is looking equally magnificent as Sita and the costumes are proving to be a special attraction. Sri Rama Rajyam is veteran director Bapu’s devotional magnum opus and the movie has been produced by Yalamanchili Sai Baba.

The music has already received a stunning response in the market and Ilayaraja’s tunes are a major hit. The movie is currently said to be on track for a November 3rd week release. The movie is being distributed in Andhra Pradesh through R.R. Movie Makers.