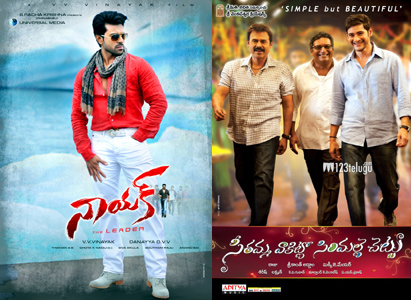 Sankranthi is traditionally a very lucrative season for Telugu films. Many big projects vie with each other to have a Sankranthi release and the situation is no different for 2013.

This time, the Telugu Film Industry is betting big on Sankranthi with two massive releases. Both ‘Seethamma Vakitlo Sirimalle Chettu’ and ‘Naayak’ have a superb buzz surrounding them and both films are expected to do a pre-release business in the region of 40 – 50 crores each. The budget of both the movies put together is already in the region of 100 crores.

There is space at the Box Office for two big films during Sankranthi and that is what is prompting distributors and exhibitors to aggressively pursue both films. Producer Dil Raju for example, has picked up the Nizam rights of ‘Naayak’ for a whopping price of more than 11 Crores despite being the producer of SVSC.

Will TFI’s 100 crore bet for Sankranthi bring in the cash for the industry? Let us wait and watch.