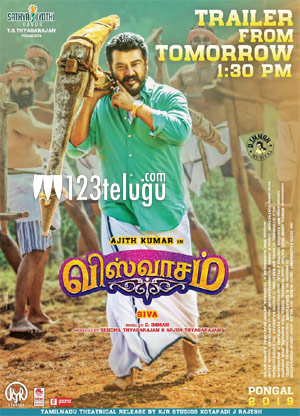 Thala Ajith’s much-awaited Pongal entertainer, Viswasam, is all set to hit theaters on January 10. Now, in an exciting update, the film’s makers today announced that Viswasam’s theatrical trailer will be released tomorrow at 1:30 pm.

Interestingly, Viswasam’s teaser has not been released and the trailer is being unveiled directly. In Viswasam, Ajith will be seen in dual avatars. Expectations on the film are quite high among fans and trade circles.

Siva has directed Viswasam and Nayanthara is the female lead in the film. Sathya Jyothi Films banner has bankrolled this high budget entertainer. The film’s audio album has been composed by D Imman.