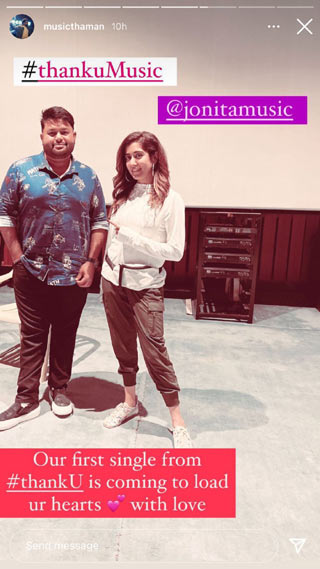 The most happening music director, Thaman S, has spilt beans about his upcoming project, Thank You. Starring Naga Chaitanya and Raashii Khanna., the movie is directed by Vikram K Kumar.

Thaman took to Instagram and posted a Story in which he posted a pic of him and the popular singer, Jonita Gandhi. He revealed that the first song from the romantic entertainer will be out very soon and hinted that the song was crooned by Jonita.

Produced by Dil Raju under Sri Venkateswara Creations, the movie also has Avika Gor and Malavika Nair in key roles. Written by BVS Ravi, the movie has recently completed its shoot and is getting ready for a grand release soon in theaters.