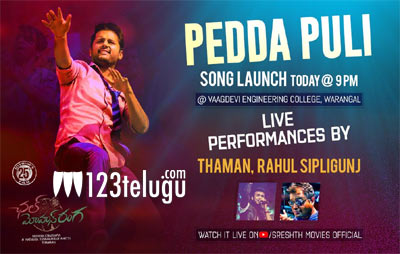 Nowadays, launching movie songs one by one has become a huge fashion. Gone are the days where there used to be huge audio launches in different cities.

The producers have now become clever and are launching songs individually. All these songs are launched mostly in colleges so that the youth could be attracted big time.

The makers of Nithin’s Chal Mohan Ranga have gone one step ahead and are arranging a live performance to launch the second song from their film.

Singer Rahul Sipligunj and Thaman will be performing live at an engineering college today evening in Warangal and will launch the song titled Pedda Puli in a grand manner.