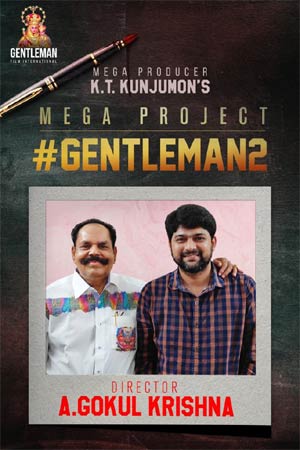 K.T.Kunjumon was one of the top producers in the past. He introduced director Shankar through his film “Gentleman”. Now he is all set to produce the second part ‘Gentleman2’.

He stunned one and all by making Keeravani the music composer for the film. As the director’s name was not revealed there were a lot of rumors and suspense continued.

Now K.T.Kunjumon has revealed the suspense by announcing the director’s name. A.Gokul Krishna who made the hit film “Aaha Kalyanam” starring Nani is announced as the director for this film.

A.Gokul Krishna has worked in films like Billa, Arindhum Ariyamalum, and Sarvam, as the Co-Director for Vishnu Vardhan. K.T.Kunjumon shared that the Hero of the film and other Technicians will be announced anytime soon.