The fascinating trailer of Prabhudeva’s My Dear Bootham is out
Published on Jul 9, 2022 11:30 pm IST 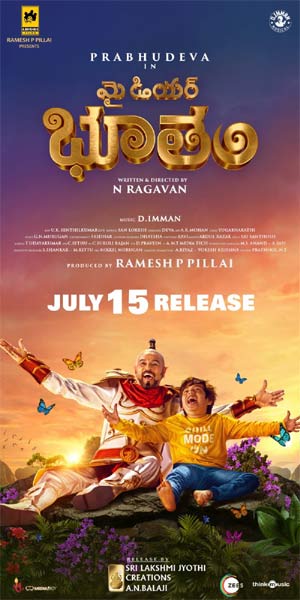 Prabhudeva who has donned different hats in the cinema field will be next seen in the film My Dear Bootham. He essays the character of a genie in this kids’ fantasy drama. The film is set for a grand theatrical release on July 15th in multiple languages.

The makers released the trailer today which is very fascinating and rides high on VFX. It revolves around a small boy whose life changes by the entry of a genie. The film is jointly produced by Abhishek Films and Ramesh P Pillai.

Music is given by D. Imman. The film stars Ramya Nambeesan, Ashwanth, Param Guhanesh, Saathvik, Sakthi, and Kaesitha in other pivotal roles. N. Ragavan of Manjapai fame is helming this flick. AN Balaji of Sri Lakshmi Jyothi Creations will be releasing the movie in Telugu.