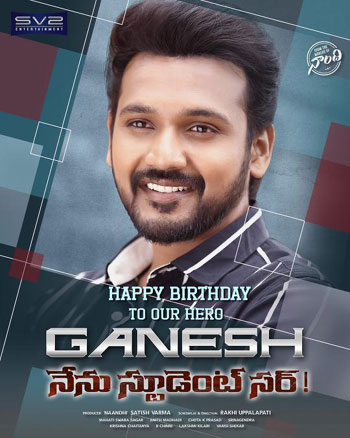 It’s young hero Ganesh’s birthday today. Thus, the makers of his ongoing films Swathi Muthyam and Nenu Student Sir! have extended their birthday wishes to him by releasing a poster each from their respective movies.

While Swathi Muthyam poster presents the actor in a class avatar, as he sits on a chair, he looks dashing in Nenu Student Sir! poster. It’s evident through these two posters that he looks apt in family entertainers as well as youthful thrillers.

The makers of Swathimuthyam announced that they will release teaser trailer of the movie today at 4:05 PM. Directed by Lakshman K Krishna and produced by Naga Vamsi under Sithara Entertainments, Swathimuthyam is slated for a grand release on October 5th for Dasara.

On the other hand, first look of Nenu Student Sir! was released a few days ago. He plays a student in the movie. Directed by Rakhi Uppalapati and produced by Naandhi Satish Varma under SV2 Entertainment, the film is presently in post-production phase.

This is second production of producer Satish Varma whose first movie Naandhi was a critically acclaimed commercial hit. Nenu Student Sir! is a unique thriller for which story was provided by Krishna Chaitanya. Mahati Swara Sagar renders soundtracks, while Anith Madhadi is the cinematographer. 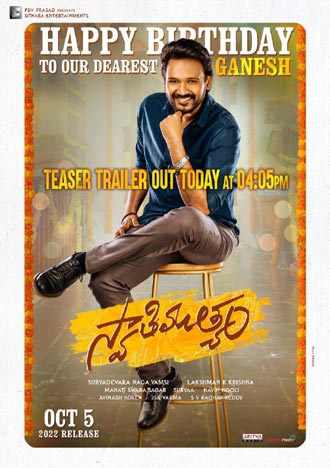