There is no Bheemla Nayak without Trivikram- Pawan Kalyan
Published on Feb 24, 2022 3:01 am IST 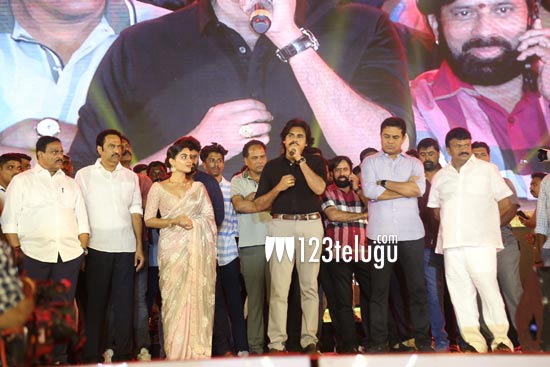 The makers of Pawan Kalyan’s Bheemla Nayak has held a grand pre-release event today at the Yusufguda Police Grounds in Hyderabad. Many fans of the actor have been attended the event and made it a grand success.

During the event, Pawan Kalyan addressed his fans and thanked the Telangana government, especially the CM KCR, KTR, and Talasani Srinivas Yadav for their continuous support to the film industry.

Speaking about the film, he gave major credit to the scriptwriter Trivikram for wonderfully adopting the original film. There is no Bheemla Nayak without Trivikram, noted the actor. Pawan also thanked Rana, Nithya Menen, Samyuktha Menon, Thaman and the rest of the cast and crew for their enormous support in making the film.

Pawan Kalyan wished that Bheemla Nayak will entertain and enthral his fans and audiences in theaters. Directed by Saagar K Chandra, the movie which is bankrolled by Sithara Entertainments will be released in theaters worldwide on February 25, 2022.