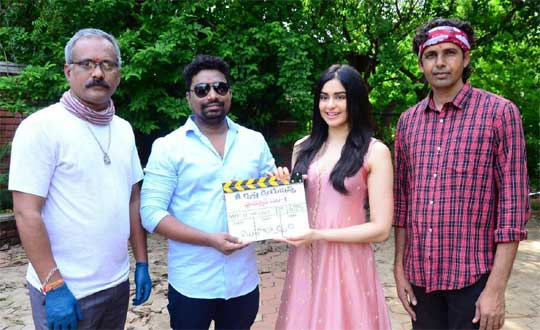 Young actress Adah Sharma, who was last seen in Kshanam and Kalki in Telugu, has launched her new film in Tollywood. The as-yet-untitled film will be helmed by two directors and produced by a newcomer under his banner Sri Krishna Creations.

Adah is quite excited about her comeback Telugu film. She took to Instagram and shared her excitement with her fans. “This is going to be a maaad maaad ride. Something like this hasn’t been done in telugu before. grateful to get a chance to do this,” she wrote.

Even though Adah is tight-lipped about the film and her role, the emojis she typed in her post suggest that the film is going to be a unique thriller and may even feature aliens. Well, let’s wait and see what the makers are up to.

Signed another Telugu film ! Wish us luck !! Both my directors and my Producer who decided to back such a crazy project 👾🐉👽 this is going to be a maaad maaad ride 🧿😈🦈💣🧤🗡️ . P.S. this is not my look from the film . Can't wait to share that with you guys sooon 😻 #mondaymotivation #blessed #100yearsofAdahSharma . . . Outfit – @_deepthee_ Styled by- @juhi.ali Hair- @snehal_uk Makeup -@makeup_sidd . . P.S.2 something like this hasn't been done in telugu before ❤️ grateful to get a chance to do this !