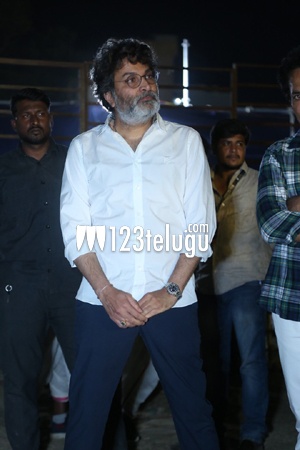 “There is no Bheemla Nayak without Trivikram,” said Pawan Kalyan in the pre-release event of Bheemla Nayak that happened last night at Yusufguda Police Grounds in Hyderabad.

The star director, who is well known for his powerful yet mesmerising speeches, didn’t give any speech in Bheemla Nayak’s event. Fans and audiences got surprised by his act.

Since the beginning of Bheemla Nayak, a section of the audience commented on Trivikram for his involvement in the movie. Though he is the scriptwriter of the movie, audiences believed that he donned the director’s hat for the film. Trivikram gave such mockers a befitting answer by not talking on the stage and also letting the director shine at the event.

Another rumour is doing rounds that an alleged leaked audio call of producer Bandla Ganesh disturbed Trivikram and that’s why he didn’t make a speech at the event to avoid nuisance.

Fans of the ace director were disappointed as he didn’t give any speech during the event.