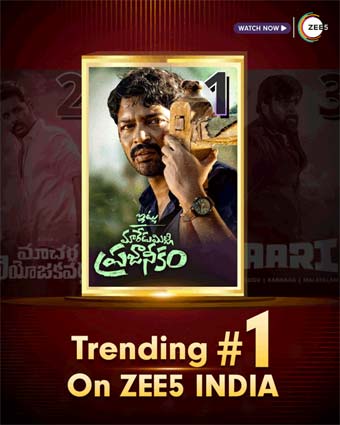 Allari Naresh recently came up with the social drama Itlu Maredumilli Prajaneekam. The movie released on 25th November had Naresh playing an election officer. It opened to mixed reviews and didn’t perform at the expected levels in terms of the box office.

After the theatrical run, the film premiered on ZEE5 recently, and the news is that the film attained a thumping response on the digital platform. The film is currently trending at the top spot on ZEE5 India. Zombie Reddy fame Aanandhi played the female lead.

The village drama also has Vennela Kishore, Praveen, Sampath Raj, and others in crucial roles. AR Mohan is the writer and director. The movie is produced by Zee Studios and Hasya Movies and has Sricharan Pakala’s music.