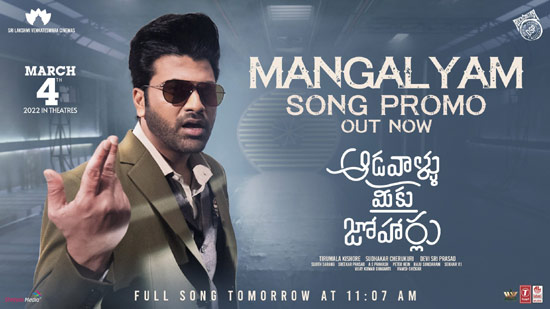 Promising actor Sharwanand and the national crush, Rashmika Mandanna have come together for Aadavaallu Meeku Johaarlu. Scheduled to release in theaters on March 4, 2022, the movie has made the headlines again.

After releasing 3 songs from the family drama, the makers have planned to release the 4th song titled Mangalyam Thanthunanena. A promo of the song has been released today to announce that the will be released tomorrow at 11:07 AM. Sung by Jaspreet Jasz, the song which is about marriage has the lyrics penned by Devi Sri Prasad, who also composed the track.

Directed by Tirumala Kishore, the movie has Urvashi, Khushbu Sundar and Radhika Sarathkumar in prominent roles. Produced by Sudhakar Cherukuri under the SLV Cinemas banner, the film has Sujith Sarang’s cinematography.