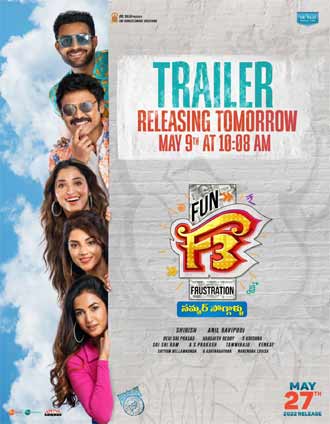 Tollywood star hero Venkatesh and Mega Prince Varun Tej joined hands for another hilarious movie called F3, a sequel to F2. directed by Anil Ravipudi, the movie is all set for a grand theatrical release on May 27, 2022.

Earlier, the makers have an answer that the theatrical trailer of F3 will be out on May 9, 2022. Today, they come up with a fresh update and it’s confirmed that the trailer will be out at 10:08 AM. A poster has been released to announce the same.

Tamannaah Bhatia and Mehreen Pirzada are the female leads in this movie. Sunil, Sonal Chauhan, and Pooja Hegde will also appear in this fun-filled movie, produced by Dil Raju. Devi Sri Prasad has composed music for the film.