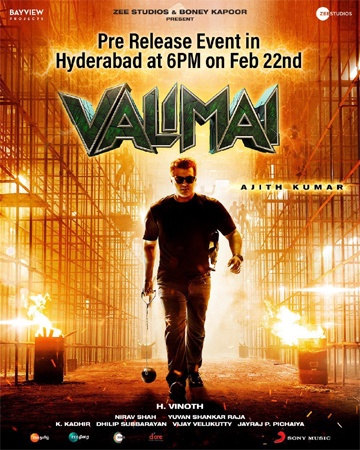 Kollywood star hero Ajith Kumar’s upcoming action entertainer, Valimai, is slated for a grand release on February 24, 2022. Ahead of that, the makers of the high-budget movie have planned to hold a grand pre-release event.

As per the latest news, the makers have decided to organise Valimai’s Telugu pre-release event in Hyderabad. The grand event will happen today in the Park Hyatt hotel from 6 PM onwards.

Telugu actor Kartikeya played the antagonist in this action thriller. Directed by H Vinoth and produced by Boney Kapoor, the movie has Huma Qureshi, Sumitra, Yogi Babu and others in pivotal roles. Yuvan Shankar Raja has scored the music for this movie, which is scheduled to release in Hindi and Kannada also on the same day.