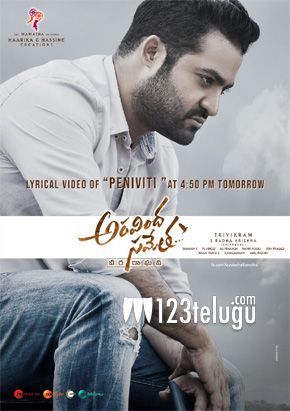 After the first song Anaganaganaga become a good hit, the time has now come for the second song from Aravinda Sametha to come out. The news is that the second single titled ‘Peniviti’ will be out tomorrow afternoon at 4.30 pm.

The talk is that Thaman has composed an intense, raw and rustic single for NTR. The first song had complete Trivikran’s touch to it and we need to see how this much-awaited number turns out to be.

The talkie part of the film has been wrapped and on the 20th, the entire music album will be out in the market directly.