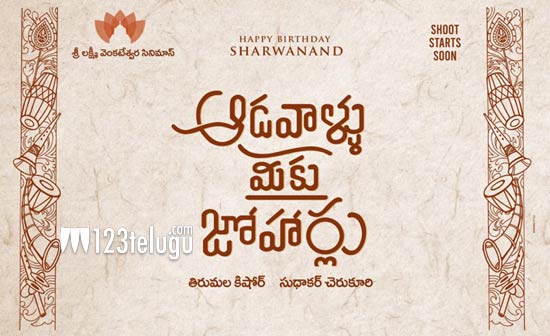 On the occasion of hero Sharwanand’s birthday, the makers of his soon-to-commence romantic drama, Aadavallu Meeku Johaarlu, have unveiled the film’s title logo poster. The film features young beauty Rashmika Mandanna as the female lead. The film’s first schedule will kick-start soon.

Aadavallu Meeku Johaarlu will be directed by Kishore Tirumala, who has also written the script, and produced by Sudhakar Cherukuri under his Sri Lakshmi Venkateswara Cinemas banner. The film was initially supposed to have star hero Venkatesh playing the main lead, but Venky had opted out of the project for reasons unknown.