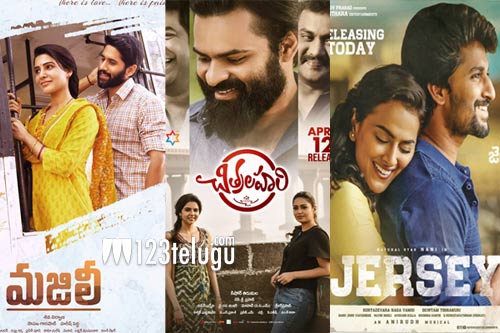 Tollywood had a forgettable first quarter this year. Barring F2 and 118, no other movie was successful at the box-office. Prominent biggies such as the NTR biopic, Vinaya Vidheya Rama, Mr Majnu and a handful of notable movies released amid high expectations and tanked at the box-office, leaving the distributors in huge losses.

However, with three back-to-back successful ventures in the form of Majili, Chitralahari and now Jersey, the trade circles finally got a major relief this April. Especially, this much-needed success came just when the general elections and IPL are posing a major threat to steal the limelight.

Majili’s success was quite important for its hero Naga Chaitanya who was having a tough time with some of his past few movies ending up as flops. Finally, Majili has turned out to be a huge blockbuster in Chay’s career. On the other hand, Chitralahari too was a make or break film for young hero Sai Dharam Tej, who gave six straight flops. Ending Sai’s flop streak, Chitralahari is all set to breach the break even mark this weekend.

Finally, Nani’s Jersey released today to unanimous positive reviews and is sure to become a good hit. Nani also didn’t have a decent success for quite some time now and Jersey is all set to give him the kind of success he has been waiting for. Now, all eyes are on the upcoming biggies like Maharshi, Saaho and Sye Raa.