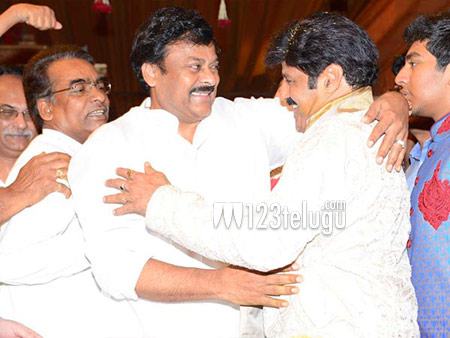 Two of the most popular film stars turned politicians in Telugu Cinema, Chiranjeevi and Balakrishna, are admired by millions of their fans not just for their films but also for their generous social work. For years, both Chiru and Balayya have been carrying out various social activities through Chiranjeevi Charitable Trust (CCT) and the Basavatharakam Indo-American Cancer Hospital & Research Institute (BIACHRI) respectively, both having administrative offices in Hyderabad.

Now, after the state division, both the stars are reportedly planning to extend their social work with centralised offices in the soon to be constructed capital city, Amaravati. Recently, there were reports that Mega fans in Vijayawada have been scouting for the right location to set up a new building for CCT. Reportedly, Chiru will be consulting the government officials regarding land allotment.

Yesterday, Balakrishna stated that he will talk to the AP government regarding the construction of a new building for BIACHRI. Balayya is expected to submit a proposal for setting up of Basavatharakam cancer hospital in AP, after the inauguration ceremony of capital construction which will be taking place on Vijaya Dasami.