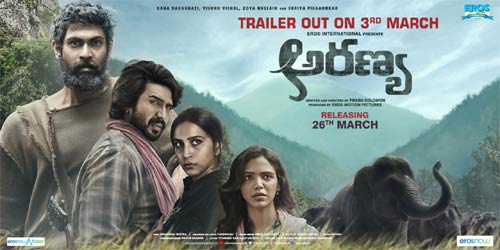 Rana Daggubati’s much-delayed pan-India action drama, Aranya, is scheduled to hit screens on March 26. The film will have a simultaneous release in Telugu, Tamil and Hindi. Kollywood hero Vishnu Vishal and Bollywood actors Pulkit Samrat, Shriya Pilgaonkar and Zoya Hussain will be seen in crucial roles in the movie.

According to the latest update, Aranya’s trailer will be out on March 3rd on the occasion of World Wildlife Day. The film has a forest backdrop, and Rana will be seen as Bandev, an orphan who is brought up by elephants before making a fortune and owning his private zoo.