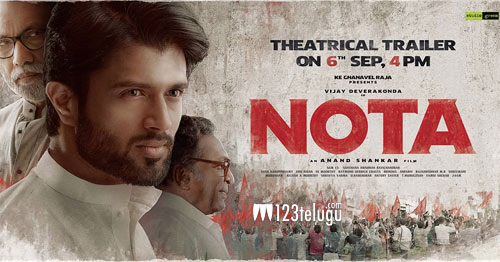 Yesterday, Vijay Deverakonda took to Twitter and that he will be kick-starting his campaign today. And this evening, he revealed that the theatrical trailer for his much-awaited political thriller, NOTA, will be out on September 6th at 4 pm. And in a couple of days, a sneak peak will be unveiled.

NOTA is a Tamil-Telugu bilingual film, which marks Vijay’s debut in Tamil Cinema. Young beauty Mehreen Pirzada is the film’s leading lady. NOTA also features veteran Tamil stars Nasser and Sathyaraj in prominent roles. The film is expected to hit screens on October 4. Anand Shankar is the film’s director and Gnanavel Raja is the producer. Stay tuned for more updates.