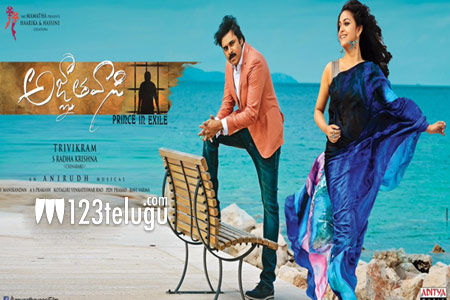 The stage is all set for the grand audio launch event of Power Star Pawan Kalyan’s highly-anticipated 25th film, Agnyaathavaasi, tonight. Fans’ expectations on the Pawan-Trivikram combo are humongous, thanks to the duo’s previous track record.

The unanimous positive response to the first two songs – Baitikochi Chusthe and Gaali Vaaluga, has further escalated the buzz on the complete audio album, which will be unveiled tonight.

Meanwhile, the craze to obtain the audio launch’s entry passes among fans is unprecedented. The film’s makers at Haarika & Hassine have announced that all the entry passes have been issued already and requested the fans who didn’t manage to get a pass to enjoy the event live on TV and YouTube.

There is a buzz that Pawan’s brother Megastar Chiranjeevi and senior hero Venkatesh will be gracing the event tonight. Also, the film’s music composer Anirudh Ravichander will be performing live at the event and this added to the hype around the event.