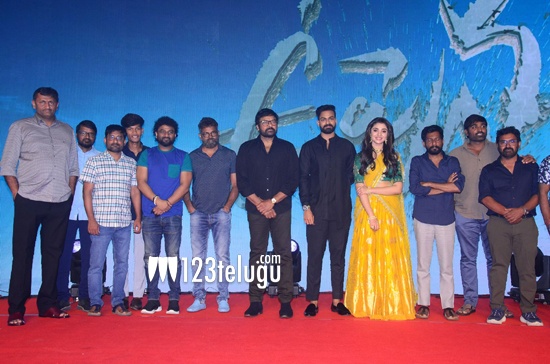 Megastar Chiranjeevi was the chief guest at tonight’s pre-release event of his nephew Vaishnav Tej’s debut film, Uppena. Speaking on the occasion, Chiru was all praise for the film and its team and expressed his confidence on the film’s success.

“I told Varun that he is lucky to be introduced with a film that has been supervised by Sukumar, a perfectionist director like Buchi and uncompromising producers like Naveen and Ravi. Thanks to them, Uppena has given a good actor to the Mega family in the form of Vaishnav Tej,” Chiru said. The Megastar also remembered how he chose Vaishnav for the wheelchair-bound boy’s role in Shankar Dada MBBS.

Also starring debutant Krithi Shetty as the female lead, Uppena has its music composed by Devi Sri Prasad. The film is gearing up for release on February 12.