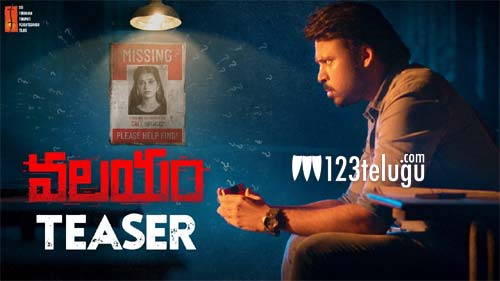 The teaser for the upcoming crime thriller, Valayam, was out earlier today. The teaser features debutant Laksh, explaining about a peculiar case he was entangled in. Going by this impressive teaser, it appears that Valayam is going to be an intriguing investigative thriller.

Valayam’s teaser has Laksh informing the audience about the missing of his wife, Disha (played by Hippi girl Digangana Suryavanshi). Laksh tells that when he goes to the police station to complaint about his wife, the cops accuse him of killing his wife. It is then that Laksh decides to solve the case himself. In his investigation, Laksh finds some clues which he leaves for the audience to solve the rest of the case.

Debutant Ramesh Kadumula is directing Valayam and Sekhar Chandra is scoring the music. The film is being produced under Sri Tirumala Tirupathi Venkateshwara Films banner.