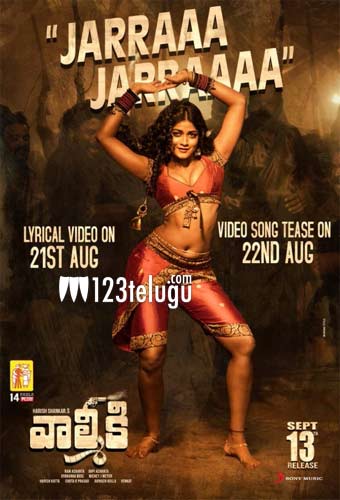 After the impactful teaser, the makers of Varun Tej and Harish Shankar’s upcoming gangster comedy, Valmiki, unveiled the film’s first single ‘Jarra Jarra’ earlier today. This ultra mass dance number has turned out to be an instant hit with music lovers.

Jarra Jarra has everything going for it, be it the cheeky lyrics by Bhaskarabhatla or the energetic vocals by Anurag Kulkarni and Uma Neha. Mickey J Meyer, who’s known for his breezy melodies, surprises with this mass outing. Finally, hero Varun Tej casts his charm throughout the song with his flamboyance and Tollywood starlet Dimple Hayati raises the heat with her sizzling appearance, although it’s only a lyrics video.

Tamil actor Atharvaa Murali and Pooja Hegde play key roles in the movie. Ram and Gopi Achanta are bankrolling this project under 14 Reels Plus banner. Valmiki is slated to release on September 13.