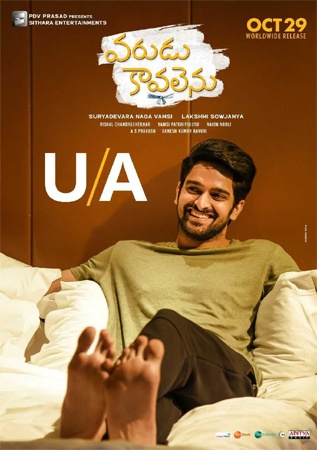 Young actors Naga Shaurya and Ritu Varma’s upcoming romantic entertainer, Varudu Kavalenu, is gearing up for its theatrical release on October 29. The film’s trailer will be launched by hero Rana Daggubati this evening at 7 PM.

Meanwhile, Varudu Kavalenu has wrapped up its censor formalities and is all set to hit the big screens. The CBFC has passed the film with a UA certificate. As the title suggests, Varudu Kavalenu’s story is centred around the wedding of its lead actors.

Varudu Kavalenu is produced by Naga Vamsi under Sithara Entertainments banner, while debutant Lakshmi Sowjanya has directed the movie. Vishal Chandrasekhar has composed the soundtrack, while Thaman has remixed the ‘Digu Digu Digu Naga’ folk number.