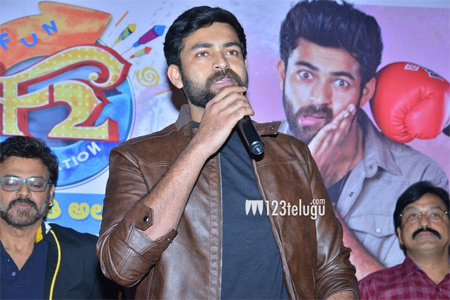 Varun Tej has built a reputation for trying different characters in his career, so far. Now, for the first time, he has attempted a comic role in Anil Ravipudi’s F2, which also stars Venkatesh, Tamannaah, and Mehreen. It’s also his most entertaining role, if the glimpse of his character in the trailer is anything to go by.

Talking about the film, Varun Tej said, “Having done films like Kanche, Tholiprema, and Antariksham in recent times, I thought I would do a comedy film at some point in my career. However, Anil Ravipudi made me perform so much comedy that it feels enough for my whole career. I should credit Venkatesh garu too for making me work harder. He’s really good with his comic timing and I learnt a lot from him.”

The film stars Varun Tej and Venkatesh as henpecked husbands, and true to its name, the film is all about fun and frustration of these two characters. F2 is slated for release on January 12.