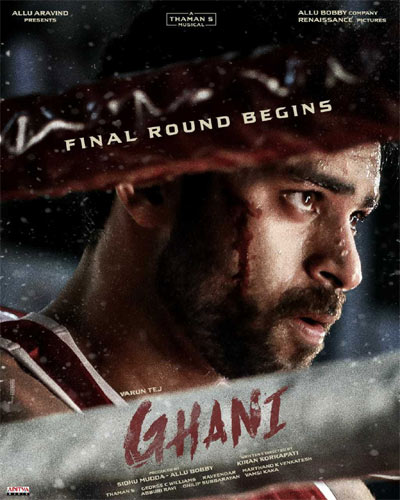 Varun Tej’s upcoming boxing drama, Ghani, has entered the last leg of its shoot. The makers unveiled a special poster this morning to announce that the film’s ‘final round’ has begun, with Varun taking part in the shooting of the film’s climax boxing episode.

Varun Tej has been rigorously prepping for the climax schedule. He has built a bulky physique to create the maximum impact. Kannada hero Upendra and Bollywood hero Suniel Shetty, Dabangg 3 girl Saiee Manjrekar will be seen in lead roles in the movie. Debutant Kiran Korrapati is directing the movie, while Allu Venkatesh and Siddhu Mudda are jointly bankrolling it. Thaman is the music composer.