Venkatesh charms as God in the surprise glimpse of Ori Devuda
Published on Sep 21, 2022 6:06 pm IST 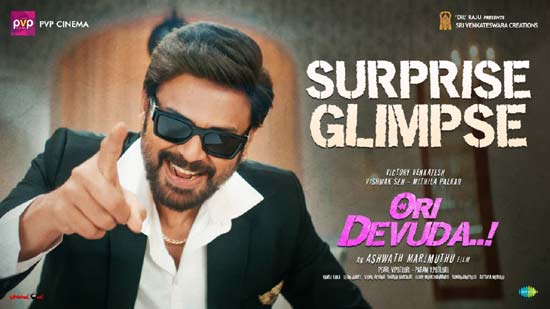 Vishwaksen starrer Ori Devuda is one of the most exciting projects from the actor. We already reported that Victory Venkatesh is playing a key role in this romantic fantasy drama. Today a surprising glimpse was released by the movie unit which features Venkatesh.

Venkatesh charms as the God in this little glimpse showing his famous mannerisms. It promises an interesting fun angle between Venkatesh and Vishwaksen. Also, it is announced that the film will be hitting the screens this October 21st.

The film is an official remake of Tamil superhit Oh My Kadavule. Venkatesh will reprise the God role played by Vijay Sethupathi in the original. Mithila Parkar is the female lead in this film that is directed by Aswath Narimuthu who also helmed the Tamil version. Asha Bhat plays an important role and it is produced together by PVP Cinema and Sri Venkateswara Creations.