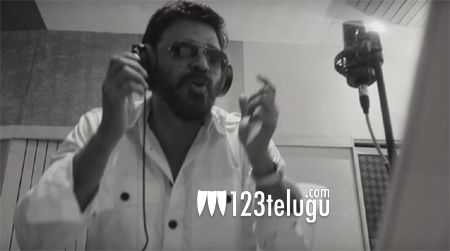 Senior star Victory Venkatesh has been enthralling his fans for over 3 decades as an actor. For the first time, Venky crooned a cheeky song in his upcoming sports drama, Guru.

The movie’s unit unveiled the making of Jingidi song this morning and fans can’t help but say that Venky has made a smashing debut as playback singer in music director Santosh Narayanan’s composition.

Being a ‘mandu pata’, the song is full of cheeky lines that discuss the downside of alcohol although in a lighter vein. Venky revealed that he liked the lyrics so much that he had agreed to sing despite his initial reluctance and that he ended up enjoying the new experience thoroughly.

Guru, directed by Sudha Kongara, is produced by Shashikanth. The film is slated for an early April release. Ritika Singh is the film’s leading lady.