Venky Mama’s team braves minus temperatures in Kashmir
Published on Dec 9, 2019 11:27 am IST 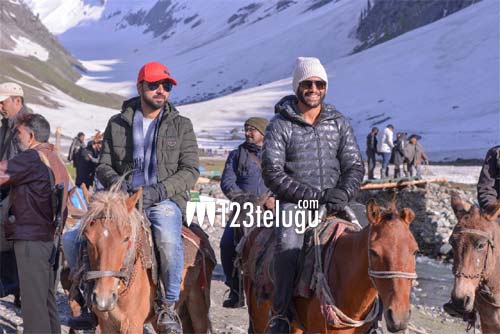 Venky Mama, the most eagerly awaited multi-starrer featuring Venkatesh and Naga Chaitanya, is gearing up for a grand worldwide release on December 13. The film’s trailer was released recently and the Kashmir sequences stood out as the major highlight.

It took a lot of ordeal while filming the Kashmir episodes for nearly 2 weeks. The unit had camped in various picturesque locales of the valley where the only transportation was horses. Apparently, the cast and crew shot a particular sequence under -4° and -5° temperatures in Sonmarg and Pahalgam. The visuals and presentation of this episode is going to be a visual treat.

Raashi Khanna and Payal Rajput are the film’s female leads. Thaman has composed the music. Suresh Babu and TG Vishwaprasad have jointly produced the movie.