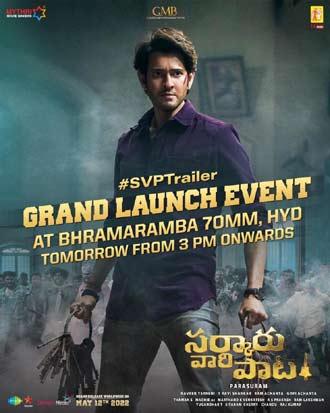 Mahesh Babu and Keerthy Suresh starrer Sarkaru Vaari Paata is slated for a grand theatrical release on May 12, 2022, worldwide. The makers have commenced promotions and as a part of that, the makers will release the trailer tomorrow.

Team Sarkaru Vaari Paata has announced that they will release the trailer in a grand manner at an event scheduled to happen tomorrow at Bhramaramba theater in Hyderabad from 3 PM onwards. Later, the trailer will be released online at 04:05 PM.

Bankrolled by Mythri Movie Makers, 14 Reels Plus and GMB Entertainment, the biggie has the musical sensation, Thaman’s music. More details of the event will be unveiled tomorrow.