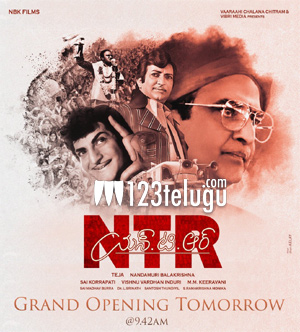 We had recently reported that the inaugural ceremony for NTR, the highly-anticipated biopic on legendary actor and ex-Chief Minister of erstwhile Andhra Pradesh NT Ramarao, will be held tomorrow. The puja formalities will begin at 9:42 am tomorrow at the Ramakrishna Horti Cultural Cine Studios in Nacharam, Hyderabad.

Grand arrangements are being made for NTR’s inaugural ceremony. Vice President of India M Venkaiah Naidu will be the chief guest at the event. Several politicians and celebrities from the film industry and fans will grace the occasion.

NTR is being directed by Teja. Apart from playing the lead role, Balakrishna will co-produce the movie along with Sai Korrapati and Vishnu Induri. MM Keeravani composes music for the movie.