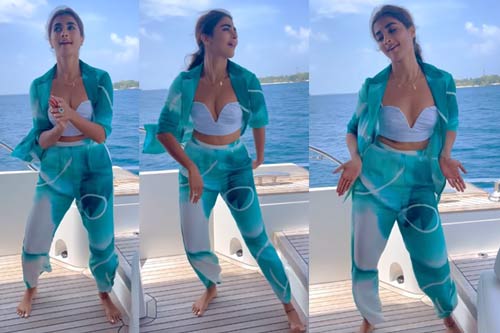 Gorgeous beauty Pooja Hegde, who is currently enjoying a vacation with her family in the Maldives, has set the internet on fire. The actress who played the female lead in Vijay’s upcoming movie, Beast, has posted a new Reel which is going viral now.

In the Instagram Reel, the actress grooves to Beast’s first song, Arabic Kuthu. Standing at the edge of a yacht, she dances to the crazy song with ease and her expressions while dancing makes the video more special. The video has gone viral in no time and in the meantime, the actress has asked fans to share their dancing videos to the same song.

To note, Arabic Kuthu, composed by Anirudh Ravichander has turned out to be the most viewed and also the most liked South Indian song in just 24 hours.

Pooja Hegde, who has a handful of crazy projects, is waiting for the release of her upcoming movies – Radhe Shyam, Acharya and of course Beast.