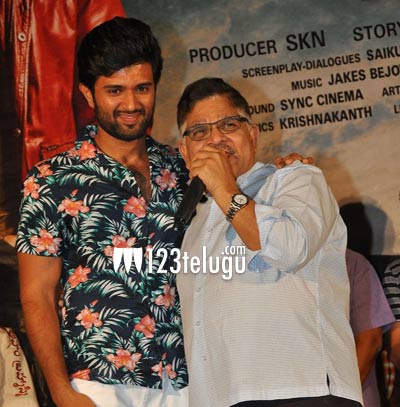 Ace producer and head of Geetha Arts, Allu Aravind is all praise for actor Vijay Deverakonda, whose latest film Taxiwala was produced under GA2 and UV Creations banner by Skn. The film’s teaser was launched earlier today, and Allu Aravind surprised the young actor when he stated that Vijay is now a youth icon.

Talking about Vijay, Allu Aravind said, “After a long time, I felt like I had met a genuine person. His emotions, the way he talks to people, and his acting style is all very genuine. He has already impressed the youth within a short time and I am sure he will go a long way in his career.” Allu Aravind also confessed that after listening to the script, he decided to give full freedom to the team to make their kind of cinema. “I didn’t want to interfere in the script and make it into a film which I like,” he said.

Rahul Sankrityan has directed the film and it also stars Priyanka and Malvika Nair in lead roles. The film is slated for release on May 18.