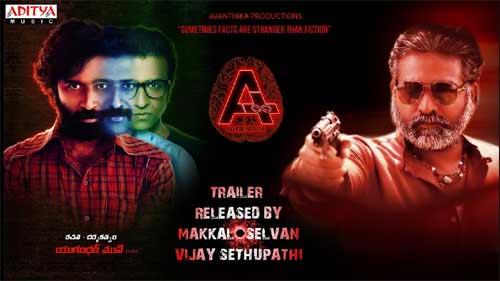 Acclaimed Kollywood actor Vijay Sethupathi has just launched the theatrical trailer for the upcoming Telugu psychological thriller, A. The film, starring Nithin Prasanna and Preethi Asrani in lead roles, is gearing up for its release on March 5.

A’s intriguing trailer showcases a young man’s life torn due to a haunting recurring dream. The trailer hints that the film touches upon various genres like sci-fi, romance apart from psychological thriller. The Netaji Subhash Chandra Bose’s connect at the end of the trailer makes things even more interesting.

Debutant Yugandhar Muni has directed A and Geetha Minsala has bankrolled it under Avanthika Productions banner. Vijay Kurakula has composed the music. PVR Pictures is releasing the film.