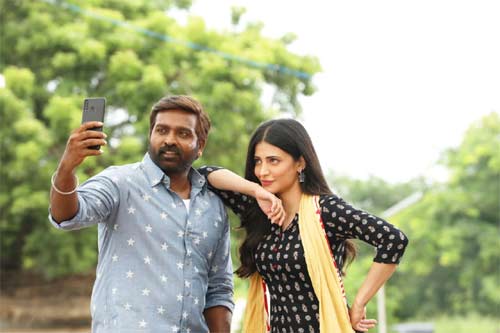 Acclaimed Tamil star Vijay Sethupathi will be sharing screen space with actress Shruti Haasan in the upcoming film, Laabam. The film marks Shruti’s Kollywood comeback after 4 years since the release of her previous him, Suriya’s Singam 3. The film is slated for release on September 9 in Telugu with the same title.

Both Vijay Sethupathi and Shruti Haasan have had a memorable year so far in Tollywood. Vijay Sethupathi scored back-to-back hits with Master and Uppena. On the other hand, Shruti’s characters in Krack and Vakeel Saab too had made a good impression. Needless to say, both Vijay and Shruti will be aiming to continue their success streak by scoring a hat-trick in Tollywood with Laabam.

Laabam is a political thriller directed by late filmmaker SP Jananathan, who breathed his last during the film’s post-production earlier this summer. P Arumuga Kumar and Vijay Sethupathi produced the movie. The Telugu version is presented by Sree Battula Satyanarayana and Lawyer Sreeram on Gayathri Devi Films.