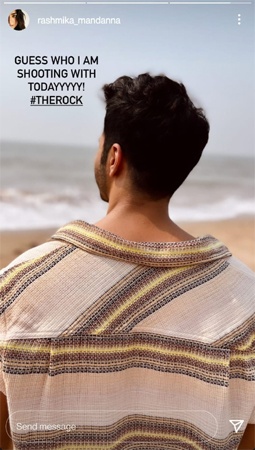 Rashmika is on top of her game as she is high on the success of Pushpa which has brought her a very good craze all over the country. Her new film, Aadavallu Meeku Joharlu is playing now in the theaters.

But Rashmika is busy shooting in Mumbai. Rashmika gave a glimpse of her co-star on Insta and said “Guess who I am shooting with today. The Rock”. It is none other than the Bollywood star Varun Dhawan.

He is called The Rock as Varun is a huge fan of Dwayne Jhonson the Hollywood star. It is not yet confirmed which project is Rashmika shooting with Varun but this image has gone viral.