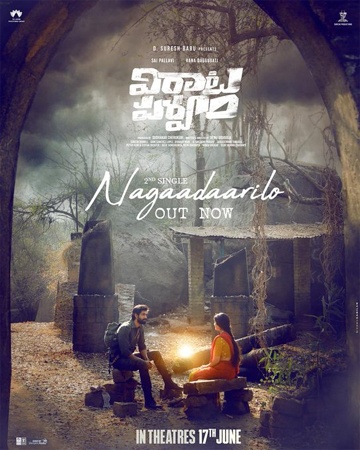 Rana Daggubati’s upcoming movie Virata Parvam, directed by Venu Udugula, is all set to release in theaters on June 17, 2022. As the release date is not far away, the makers of the film have commenced the promotions.

As part of that, they have released the second song from the movie. Titled Nagaadaarilo, the song, composed by Suresh Bobbili, has the vox of Varam. Dyavari Narendar Reddy and Sanapati Bharadwaj Patrudu have penned touching lyrics, which makes the song worth listening to.

The makers have dedicated the song to the playback singer KK, who died on May 31. Like the first track, this song also will get a special place in the playlist of many musicophiles.

Sai Pallavi played the love interest of Rana in this movie, which also has Priyamani, Nivetha Pethuraj, Nandita Das, Naveen Chandra, and others in pivotal roles. Suresh Babu and Sudhakar Cherukuri produced the flick under Suresh Productions and Sri Lakshmi Venkateswara Cinemas banners.