Vishal lines up an exciting thriller for August
Published on Apr 3, 2021 1:35 am IST 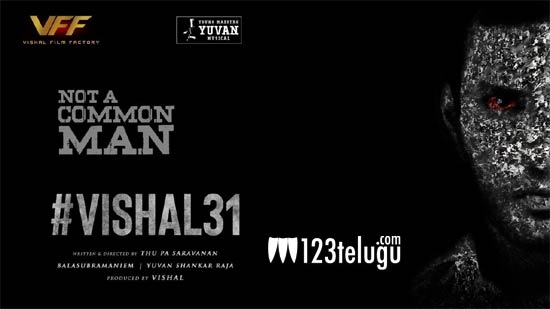 Kollywood hero Vishal has been busy wrapping up his upcoming action entertainer, Enemy. He also has the sequel to his acclaimed detective thriller, Thupparivaalan, lined up next. And today, Vishal announced yet another exciting thriller and it will be released in August. The film marks Vishal’s 31st project.

This as-yet-untitled film will feature Vishal as a ‘not so common man’. The intriguing motion poster has raised curiosity on the film’s story. Thu.Pa.Saravanan will be directing the film and hotshot music composer Yuvan Shankar Raja will be scoring the soundtrack. Vishal himself produces the movie under Vishal Film Factory banner.