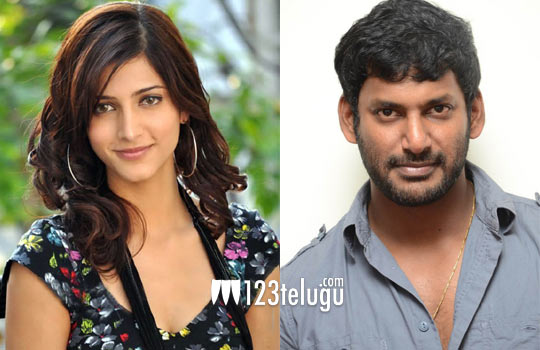 Vishal and Shruti Haasan are teaming up for the first time for an upcoming Tamil film titled Poojai. Hari is going to direct this film and this is his first project since the release of Suriya starrer Singham 2. Naturally, there are high expectations from Hari’s latest offering.

The film will be officially launched this weekend and the shooting is expected to begin from mid April. Sathyaraj is going to play an important role and the film also stars Radhika, Soori. Yuvan Shankar Raja is scoring the music and Priyan is the cinematographer. Currently, Hari is scouting for locations to shoot the film.

Meanwhile, Vishal’s next film titled Indrudu is slated for release on April 11. Lakshmi Menon has played the lead role in this film and Vishal has pinned a lot of hopes on the success of this film after his previous film Palanadu got an average response in Telugu.