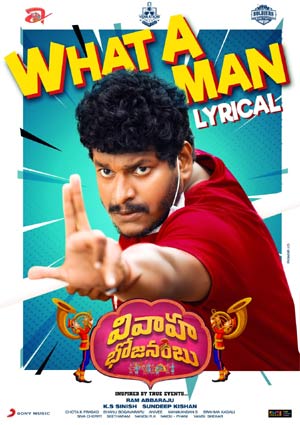 Popular comedian Satya is playing a lead role in hero Sundeep Kishan’san upcoming production, Vivaha Bhojanambu. Aarjavee is the film’s female lead. Sundeep will be seen in as special cameo as Nellore Prabha in the movie.

Vivaha Bhojanambu launched the ‘What A Man’ song on Friday. Composed by Anirudh Vijay (AniVee), the song is penned by Samrat. Happening playback singer Chowrasta Ram has crooned this hilarious number that builds the male protagonist’s character in an entertaining way.

Vivaha Bhojanambu is being directed by debutant KS Sinish and Anandi Arts, Soldiers Factory and Venkatadri Talkies banners are jointly bankrolling it. The film is inspired by true incidents that took place during the lockdown.