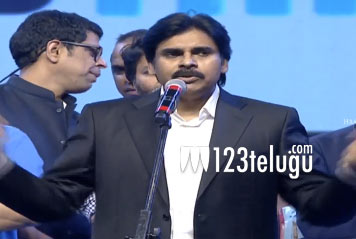 Power Star Pawan Kalyan’s speech at tonight’s audio launch event of his landmark 25th movie, Agnyaathavaasi, was full of heartfelt gratitude. Addressing hundreds of enthusiastic fans who kept cheering throughout his speech, Pawan revealed that at one point he wanted to quit acting.

“There was a time when I was very depressed in my life after Jhonny’s failure and even contemplated quitting after acting in 5 more movies post Khushi’s release. But your constant love and support during my struggling days made me complete 25 movies now,” Pawan said.

Pawan further said that Trivikram has been a good friend over these years and that it was Trivikram who made him discover one of his favorite poets, Gunturu Seshendra Sarma. The Power Star said that Seshendra Sarma’s writings lit the fire inside him and inspired him to do something for the country.