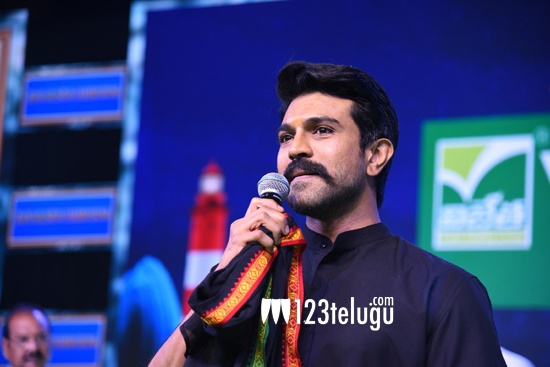 Star hero Ram Charan was the chief guest at Uppena’s success celebrations that were held in Rajahmundry tonight. Speaking at the event, Charan saluted Telugu movie lovers for reviving Tollywood like never before after the pandemic and resulted in Uppena’s record breaking success.

Tallking about his cousin and Uppena’s hero Vaishnav Tej, Charan said that Vaishnav and all the Mega heroes are lucky to have Chiranjeevi and Pawan Kalyan in their lives. Charan said that his father Chiru had listened to Uppena’s story 4 times, something which he never did even for his (Charan’s) films. Charan also revealed that Pawan Kalyan noticed Vaishnav’s sincerity and sent him to an acting school abroad to groom him before his silver screen debut.

Talking about the film’s leading lady Krithi Shetty, Charan said that Krithi has stolen everyone’s hearts with her performance and wished that she will attain great heights in her career. Charan also lauded the film’s antagonist Vijay Sethupathi, director Buchi Babu Sana, producers Naveen and Ravi and music composer DSP and all other core cast and crew members.