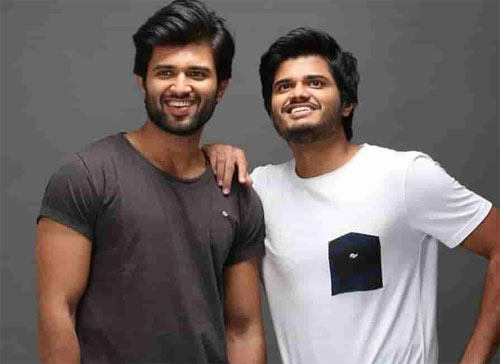 Hero Vijay Deverakonda’s latest home production, Pushpaka Vimaanam, is gearing up for its theatrical release on November 12. Starring Vijay’s brother Anand Deverakonda, Geeth Saini and Saanve Meghna in lead roles, the film is carrying a decent buzz thanks to the agressive promotions by Vijay.

Last night, Vijay took to social media and posted a video which he shot in a hotel room in Vizag during the recently concluded pre-release event. Vijay reveals that his brother Anand, who is deep asleep, is sharing the bed with him. Vijay then wakes up Anand and pulls his leg by asking, “Why are you sleeping here? Where is your wife?”

An irritated Anand first pleads Vijay not to bother him, but eventually discloses that his wife has eloped with another man, thereby revealing the basic plot of Pushpaka Vimaanam. Well, let’s wait for the film’s release to know what the actual story is. Directed by debutant Damodara, the film has been jointly produced by Vijay and Anand’s father Govardhana Rao Deverakonda, Vijay Mattapally and Pradeep Errabelly.